The history of the cleaning system in place (CIP-system) originates in the dairy industry. Cleaning the milking system has always been a big problem. 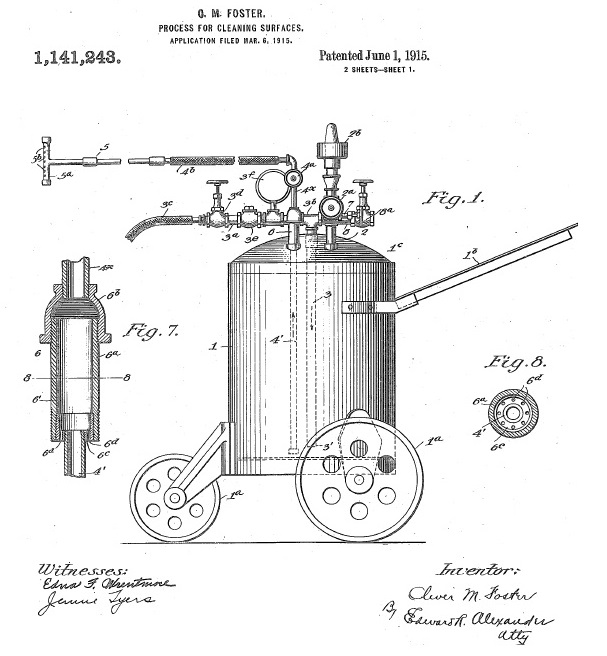 In the article “Care of dairy utensils” (“Care of dairy utensils”) in 1896 by R. A. Pearson, the first phrase and keynote is “Cleanliness underlies all successful work in darying” – “Purity is the basis of successful work in the dairy sector “. The author tells about the ways of cleaning the cans for milk, butter, scoops and other tools of that time. In the beginning, simple hand washing with a brush with soap or soda solution is described, but steam sterilization is also suggested, not only with a steam jet coming out of a boiler tube, but also in a special cabinet where objects are steamed from all sides. This sterilizing cabinet is probably one of the first attempts to automate the process of cleaning dairy equipment.

The first device, reminiscent of a real CIP-system, was patented in the US in 1915. The patent is called “Process for cleaning surfaces” and describes both the device and the process of cleaning the equipment. The document does not specify for which industry the device is intended; the author writes that it is possible to clean different surfaces, including railway locomotives and cars.

The device described in the patent has a sealed tank of 26 gallons (118 l), with a working volume of 24 gallons (109 l). Water is poured into the tank, liquid soap is added, and then compressed air or steam (tube 3) begins to flow through the liquid. Water and soap are mixed, and then this mixture enters the homogenizer 6. Its device is quite original: in the lower part there are holes through which air comes from the tank under pressure; simultaneously with air through pipe 4, soap solution enters the tank. At the top of the device there is a shutter with holes, and the solution, under the influence of compressed air and, passing through these holes, turns into soap foam. The author emphasizes that this foam is so homogeneous and dense that it remains on the surface to be cleaned for quite a long time without draining. Washing foam comes out through the pipe 5. A hose with a cleaning head is joined to the pipe.

Of course, the device is rather primitive – the concentration of alkali is not controlled in any way (the author recommends determining the right amount of soap independently, depending on the degree of surface contamination), but nevertheless, the vessel can withstand a pressure of 70-90 pounds (5-6 atm.), Valves and a manometer are installed on it, and the liquid can be heated with steam. 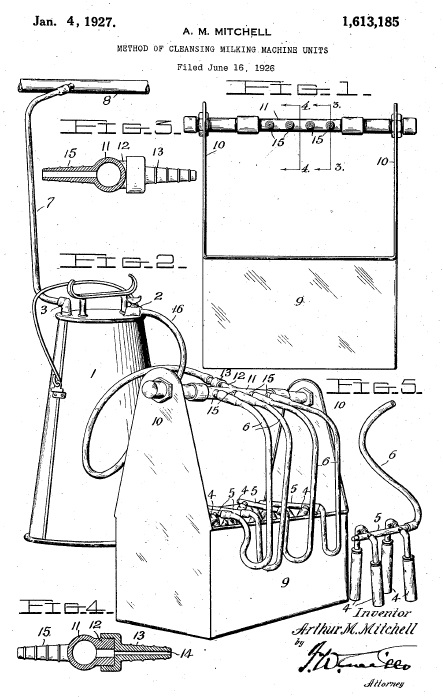 In 1927, another American inventor patented an automatic washing machine for milking equipment. The method of washing with the help of the invented skid 9 is patented, consisting of flowing the cleaning solution through the teat cups, hoses and milking bucket at the same vacuum level as when milking. The increased pressure of the solution on the walls of the dairy equipment is achieved by the small diameter of the opening 14 at the outlet 13 of the washing skid. The circulation of the solution is not provided. After washing the dairy equipment with a cleaning solution, the nozzle with a small hole 13 is removed and the entire system is washed with water. The invention makes it possible to wash four milking machines simultaneously.

The very concept of “Cleaning In Place” (“washing in place”) was formed in the 50’s. One of their first books on this subject was published in 1959 and is called “In-place Cleaning of Dairy Equipment”. There are only 61 pages and four chapters in it:

Chapters III and IV describe the main operations of cleaning in place, as well as the possible values ​​of the washing parameters. For example, the flow rate of the cleaning solution should be 5 feet (1.5 m) per second, and the temperature should not be below + 60°C. Also, the book covers topics such as the volume of the washing liquid, the composition of detergent solutions (acids, alkalis, anionic surfactants, iodophores, chelating agents), sterility testing, economic and engineering aspects. The book was so successful that it survived three editions, the last one published in 1990.

Manufacturing of CIP-stations is a rather complicated technological process, because the tanks must withstand a sufficiently high pressure (cleaning of the equipment is carried out at a pressure of up to 3 bar), as well as the effects of acid and alkali, the main detergent reagents.

The CIP-station, which is shown below, is intended for washing a bioreactor with a volume of 5000 liters.