The photodiode with the red filter measures the oxygen-dependent red light generated on the luminophore through luminescence (fluorescence) caused after exitation by the blue light. Electrons are excited to a higher energy level, and return to their original level after emission of red light 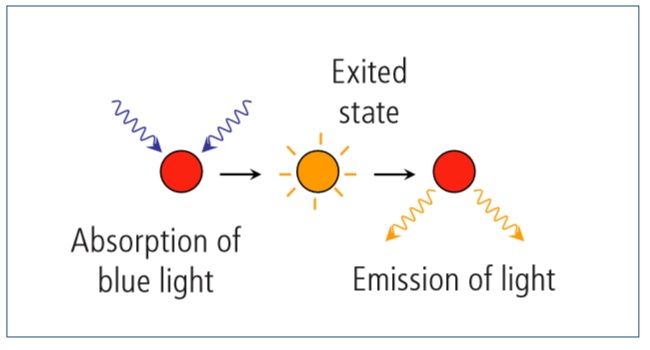 When the luminophore comes into contact with elemental oxygen, the O2 molecules absorb the  energy, resulting in reduced intensity of red light emission. 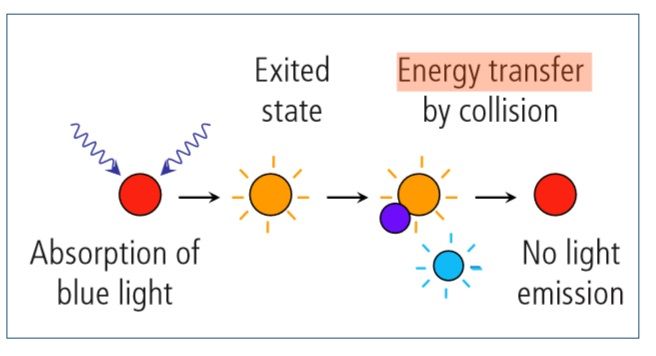 This difference in intensity is analyzed by the instrument’s self-monitoring system to pinpoint photobleaching (bleaching of the luminophore). High precision measuremet of the optical phase shift between the blue and red light pulses provides accurate indication of oxygen concentration.  Normally, the luminophore’s excited electrons remain in this state for some time.  However, in the presence of oxygen they return to their ground state more quickly.

Between the pulsed excitation of the luminophore with blue light and the emission of red light, there is an oxygen-dependent time shift which can be measured as an angle of phase. Measurement, calculation, and output of the measured value occur entirely inside  the sensor. Notice sensors measure the partial pressure of oxygen (pO2) just as classical sensors do. This can be displayed as % air saturation, concentration in mg/l, ppm, or even as ppb. The measurement range is currently limited to 0.05% to 300% air saturation (4 ppb to 25 ppm). For most applications this measurement range is more than adequate. When calibrating the sensor well, the limit is even below 1 ppb.

Operational reliability is  paramount A comparison with classical measurement technology The most common malfunction of classical Clark Cells is caused by damage to the mechanically sensitive oxygen membrane. If a membrane is seriously damaged, the chances are good that a visual check will catch the problem.  However, if a small, unnoticeable defect develops on the membrane, this becomes apparent only when the electrolyte starts to leak, and the sensor stops working.

Sensor does not suffer from this problem, because it has no fragile membrane and no electrolyte; instead, it has a robust, solid Sensor Cap. Cable transmission of very low Clark Cell currents to amplifiers represents a further problem in demanding industrial environments, because of the risk of chaotic or non-reproducible signals caused by dirty or moist contacts from perspiration on fingers.  In addition, vibrations  and small fluctuations in temperature can alter cable resistance noticeably.  Damp cables – and especially, damp connections – are often the cause of problems in oxygen and other measurements, such as pH.

Measurement results of sensor can be sent from the sensor as robust   4 to 20 mA analog, or digital signals. Both are far more tolerant of difficult process conditions than the sensitive (nA) signals of a classical electrochemical dissolved oxygen sensor. 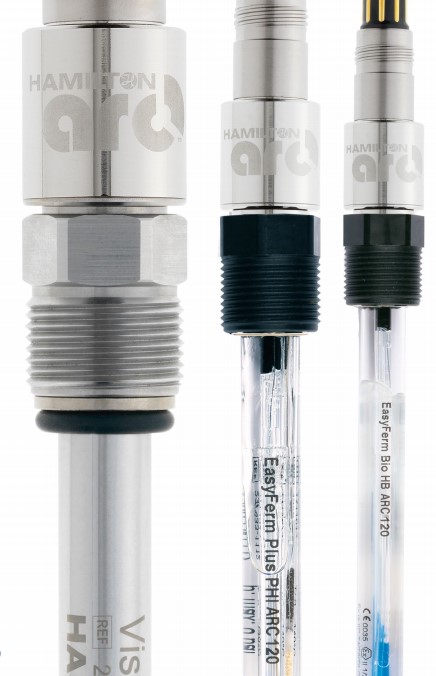